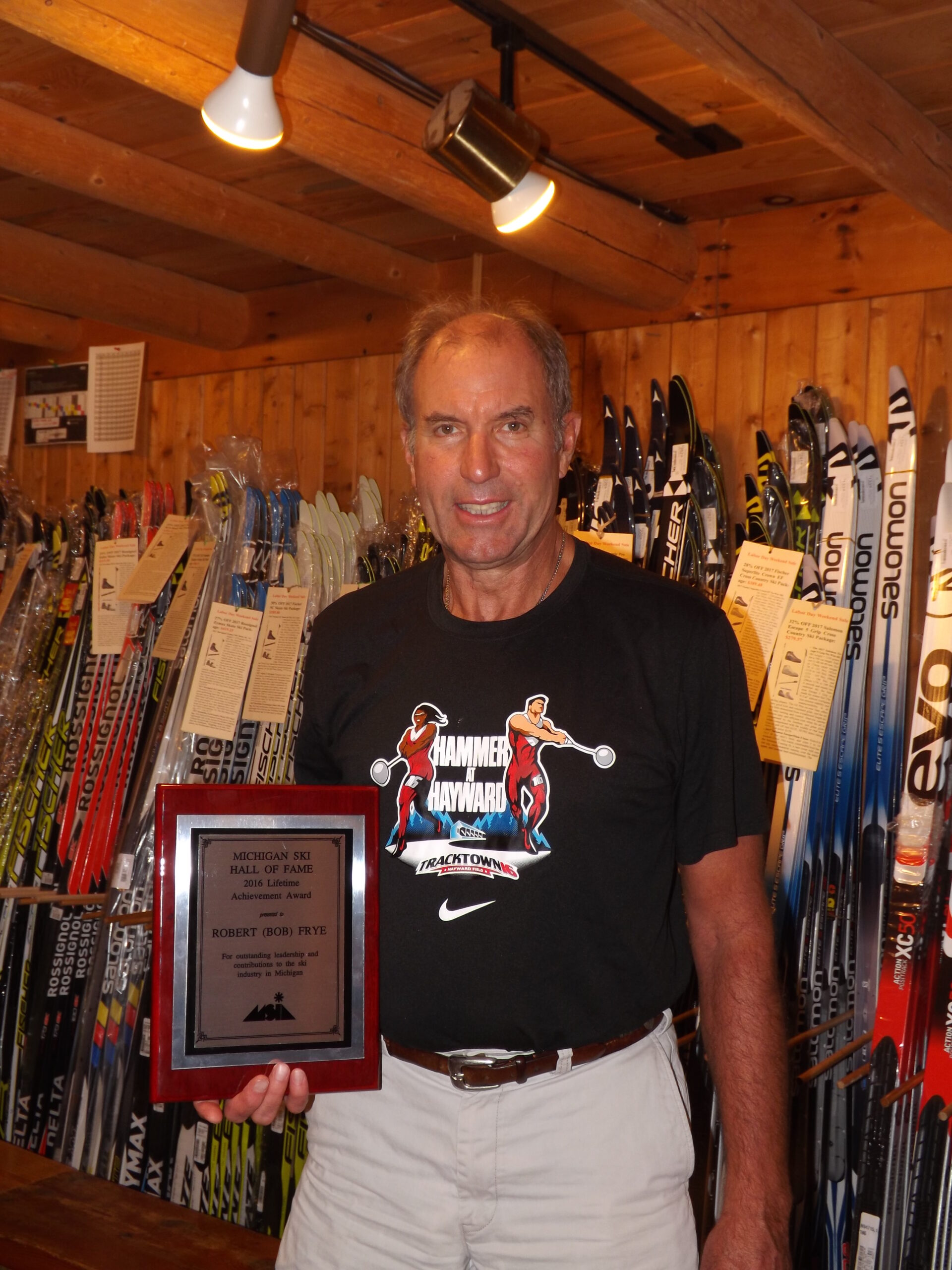 ROSCOMMON – Robert (Bob) Frye, original owner of Cross Country Ski Headquarters in the Higgins Lake/Roscommon area was inducted into the 2016 Michigan Ski Hall of Fame. He was awarded the 2016 Lifetime Achievement Award for Outstanding Leadership and contributions to the Ski Industry in Michigan.

‘When I was told that I was being awarded this honor I was surprised. I never thought about my work in that way. Now I make it a point to show my plaque to everyone,’ Frye said.

The Michigan Ski Hall of Fame was created to recognize those individuals who have contributed significantly to the growth of skiing and snow sports in the state of Michigan.

‘I thought that my wife Lynne should have been inducted into the Hall of Fame also as she is such an intricate part of this business. This achievement was only met with our customers. Without them we wouldn’t have this achievement. I owe it to all the skiers and cross country skiers in Michigan,’ he said.

In 1988, Bob co-founded the Great Lakes Nordic Ski Council, which is now known as the Great Lake Winter Trails Council and is still its president. In addition to that, Bob served on the board of Cross Country Ski Areas of America for eight years and on the Nation Cross Country Committee of SIA (Snowsports Industries of America) for four years.

Bob Frye also holds the patent for the ski accessory called ‘Ski Bones’ since 1982. After the original product kept falling apart, the company that was making them went out of business. Frye purchased the patent and developed a mold to make the product that would be more sustainable to its use. Ski Bones are made out of a surgical grade rubber and are manufactured here in Michigan. They are used to hold skis together and protect their bases. The product is sold to ski shops throughout the country.

In July, 2016 Bob Frye sold the Cross Country Ski Headquarters to his daughter Mariah Frye-Collie and her husband, Stewart Collie. Bob still works there on a daily basis to continue being a part of the company he built.

‘Working with someone who is in the Ski Hall of Fame is humbling, but not a surprise in this case,’ Collie said. ‘My wife and I meet so many people who speak highly of Bob and the Ski Headquarters each year. Some people that have been coming here since 1974 are still coming here today because of the business that Bob and Lynne have built.’

‘The sale of the Headquarters allows for more time to go skiing and enjoy the trails,’ Frye said.

The Cross Country Ski Headquarters is open by appointment right during the off season. It officially opens for the ski season on October 29. They will be open seven days a week. You can visit their website at www.crosscountryski.com or call 989-821-6661 for information.

For information on promoting your business in any of our products please contact Tracy Constance at 989-275-1170 (tracy@ausablemedia.com) or Walt Smith at 989-390-5359 (waltsmith1955@gmail.com).
If you have information you would like to see published, email Theresa Ekdom at theresa@ausablemedia.com, or Elana Warsen at elana@ausablemedia.com. You can also enter calendar items at your convenience at ww.UpNorthVoice.com.